WE ARE NOW SHIPPING WORLDWIDE 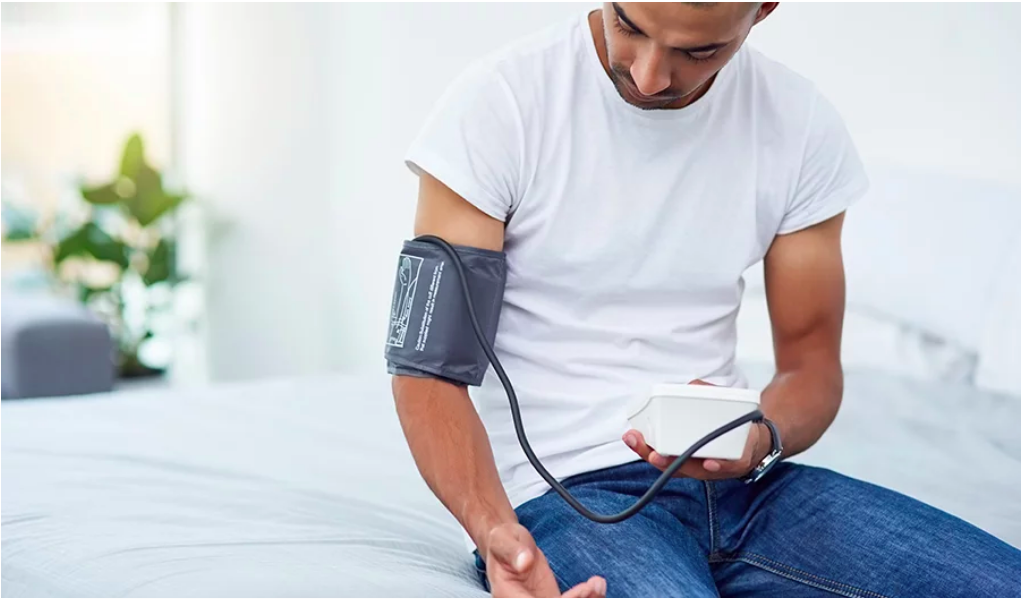 High blood pressure, also known as hypertension, is a common condition that requires the heart to pump harder than desired due to increased pressure and stiffness in the arteries. Affecting hundreds of millions of people worldwide — one in every four adults — this condition often causes no symptoms, leaving many with high blood pressure undiagnosed. For this reason, hypertension has been called “the silent killer”. High blood pressure is known to increase the risk of heart attack, stroke, heart failure and kidney disease, especially if left untreated.

Blood pressure consists of two numbers, traditionally measured in millimeters of mercury (mmHg). The first number is the systolic blood pressure and the second is diastolic pressure. Blood pressure is expressed as 120/80 (systolic/diastolic).

*Values are different for children

What Causes Hypertension?
There are many causes of hypertension, including lack of physical activity, poor diet, overweight, obesity, insulin resistance, prediabetes, diabetes, kidney disease, certain medications, and genetics. However, it may occur as a consequence of aging without any other specific cause present.

Diets rich in vegetables, nuts, and fresh fruits can be beneficial because they provide potassium, magnesium, and calcium, all of which help bring balance and health to the circulatory system.

Conventional Blood Pressure Therapy
Thanks to the advancement of science and the pharmaceutical industry, physicians and patients have been able to treat high blood pressure and, subsequently, reduce the dangers associated with it. Over the last several decades, high blood pressure medicines have been used as the primary means of reducing elevated values.

Below is a list of commonly used blood pressure medications and the class to which they belong. I have used all of them for my patients at one time or another. While there is little question about their effectiveness, side effects are a concern to many. In most instances, however, the benefits outweigh the risks. Frequently, a person will take two or more medications from the various classes in order to control their blood pressure.

Supplements That Can Help Lower Blood Pressure
Below we will discuss supplements that have been shown to help lower blood pressure. If you are on prescription medications, consult with your personal physician prior to starting a supplement as adjustments to your medications may be necessary.

Beetroot Juice Extract
Many vegetables, including beets, contain a high concentration of nitrates, which when consumed, can be reduced to nitrites by bacteria commonly present in the human mouth. The nitrites are dissolved in saliva, swallowed, and absorbed into the blood where they are converted into nitrous oxide, a potent vasodilator of blood vessels. This provides the blood pressure-lowering effect. Beetroot juice and its extract, specifically, contain a high concentration of inorganic NO3.

A 2012 study in The British Journal of Nutrition compared intake of beetroot to a placebo. The results showed a significant reduction of blood pressure when at least 100 grams of beetroot was consumed. A 2013 study in the Journal of Nutrition showed that consumption of beetroot juice, rich in inorganic nitrates, resulted in a significant reduction in systolic blood pressure. In total, 254 people were included in the studies reviewed.

A 2014 study evaluated the effect of beetroot supplementation in overweight subjects. Those who took the concentrate saw more than a seven-point reduction in their blood pressure. Further, a 2016 study in the European Journal of Nutrition showed that beetroot supplementation helped improve endothelial function, which likely explains the mechanism by which blood pressure is improved.

Lastly, a 2017 meta-analysis study in Advances in Nutrition showed beet juice consumption resulted in an overall reduction of blood pressure values by 3.55/1.22 mmHg. This can play an important role in overall vascular health.

Suggested dose: As directed on the label.

Coenzyme Q10
Co-enzyme Q10 (CoQ10), also known as ubiquinone, is a naturally occurring antioxidant nutrient required for life. Coenzyme Q10 is necessary for cells to generate energy. This is done, primarily, in a part of the cell called the mitochondria, the cellular “powerplant” that generates energy in the body.

Since the heart is the most active of all organs, it produces and requires the most CoQ10 in order to meet its metabolic demands. However, in those with cardiac disease, higher levels of CoQ10 are required to help optimize function.

A 2015 double-blind, randomized controlled study of male Japanese athletes who took 600 mg of CoQ10 per day saw a significant reduction in diastolic blood pressure in those athletes after 10 days.

Mayo Clinic also backs use of CoQ10 for high blood pressure as did a 2015 study in the Annals of Medicine. However, a 2016 study in Cochrane reviews did not see significant benefit in lowering blood pressure.

The effect might be nuanced. A 2018 study which looked at 17 randomized controlled trials which included 684 participants concluded, “CoQ10 supplementation may result in reduction in Systolic Blood Pressure (SBP) levels, but did not affect Diastolic Blood Pressure (DBP) levels among patients with metabolic diseases.”

Hawthorn Berry
Hawthorn berries are small fruits that grow on shrubs or trees that belong to the crataegus genus. They have been used for medicinal purposes for hundreds of years and can be traced back to Traditional Chinese Medicine (TCM). These berries have been used for heart health, blood pressure-lowering, and also for digestive issues. Hawthorn berries are loaded with antioxidants, specifically polyphenols, which also have anti-inflammatory properties.

A 2002 study of 36 people with high blood pressure showed that 500 mg of hawthorn berry could help lower diastolic (the lower number) blood pressure. However, this study did not show a benefit in lowering systolic blood pressure, the top number.

A 2006 study in the British Journal of General Practice showed benefit of hawthorn berry in lowering overall blood pressure values. In the study, 79 patients with type 2 diabetes were separated into two groups. Thirty-nine patients were given 1,200 mg of hawthorn berry supplement, while the other 40 were given a placebo pill. The subjects were followed for 16 weeks. The results showed those taking the hawthorn supplement had a three to five-point reduction in their blood pressure — those taking the placebo saw no reduction. There were no side effects noted.

Grape Seed Extract
Grape seed extract is exactly what its name suggests, and it has many potentially health-boosting properties. In addition to blood-pressure-lowering benefits, grape seed extract can also empower the immune system.

L-Arginine
L-arginine is an amino acid, a building block of proteins. It is primarily found in red meats, seafood, poultry and dairy products and is considered a semi-essential or conditionally essential amino acid. L-arginine is a precursor to NO, or nitric oxide, a potent vasodilator of blood vessels. It can be beneficial in lowering blood, according to studies.

A 2011 study in the American Heart Journal showed benefit. Researchers evaluated 11 randomized, double-blind placebo-controlled trials. In total, these studies looked at 387 patients with high blood pressure. The dose of L-arginine taken ranged from 4 to 24 grams per day. Systolic Blood Pressure was reduced by 5.4 mm/hg while Diastolic Blood Pressure was reduced by 2.7 mm/ Hg.

Magnesium
It is estimated that up to 60 percent of adults do not have adequate magnesium intake, and 45 percent are clinically deficient. In general, the magnesium content of most fruits and vegetables has declined over the past 100 years. Magnesium is involved in over 400 biochemical reactions within the human body and acts as a natural calcium channel blocker, a class of blood pressure-lowering medications that pharmaceutical companies have learned to utilize.

A 2011 study showed that magnesium could lower blood pressure numbers by 5.6/2.8 mmHg, which is statistically significant and comparable to some prescription medications. In addition, a 2011 study concluded, “Oral magnesium acts as a natural calcium channel blocker, increases nitric oxide, improves endothelial dysfunction, and induces direct and indirect vasodilation”. These are all the actions expected of a blood-pressure-lowering medication.

A 2016 meta-analysis study of double-blind-placebo-controlled studies found that magnesium supplementation could lower blood pressure. Further, a 2017 meta-analysis of randomized controlled trials published in the American Journal of Clinical Nutrition showed that magnesium supplementation significantly lowers both systolic and diastolic blood pressure in those with insulin resistance and pre-diabetes.

Omega-3 Fatty Acids
Omega-3 fatty acids, also known as polyunsaturated fatty acids or PUFAs, play an important role in overall human health. They are believed to have numerous benefits for the heart, brain, gut, and joints. Omega-3 fatty acids may also help lower blood pressure. These important nutrients can be found in a variety of food sources, which include krill oil, fish (mackerel, cod and salmon are among the richest), walnuts, chia seeds, flax seeds, hemp seeds, avocado, and natto.

A 2009 randomized controlled trial published in the Journal of Hypertension showed that omega-3 fatty acids could help lower blood pressure when taken at a dose of 4 grams (4,000 mg) per day. A 2014 study in the American Journal of Hypertension showed that DHA/EPA lowered systolic blood pressure and when more than 2 grams (2,000 mg) per day were taken, diastolic blood pressure (the bottom number) was also lowered. In total, 70 randomized controlled trials were evaluated in this 2014 study.

Lastly, a 2016 study in the Journal of Nutrition showed that consumption of fish oil at a dose as low as 700 mg per day could help lower blood pressure in a significant manner. According to a 2017 study, omega-3 fatty acids resulted in significant improvements in both vascular function and lowering of blood pressure.

-Satisfaction guaranteed with our 60 day money back guarantee

During an erection, the tissues in your pens fill with blood. The more blood these tissues hold, the bigger and harder your SHAFT becomes. lorenxo expands the blood vessels leading to the erectile tissues in your shaft, increasing the flow of blood to them when you have an erection. This increase in blood flow to your shaft gives you longer time, bigger, harder, longer lasting erections, and enables you to experience stronger, more intense orgasms.

That’s not all. Improved blood flow also means oxygen and nutrients are delivered much more quickly to your cells, delaying fatigue and boosting your stamina during playtime. With Lorenxo you can give your partner what they really want with rock-hard erections and all night st

Vitamin C (Ascorbic Acid)
Vitamin C, also known as ascorbic acid or ascorbate, has been one of the most researched vitamins over the last 50 years. A search of the scientific literature reveals that over 53,000 studies have been conducted on vitamin C since the late 1960s. Their findings show that it helps promote a strong immune system as well as cardiovascular, brain, and skin health among many other benefits. Lowering blood pressure may also be a benefit, and conversely, low blood levels of vitamin C are associated with high blood pressure levels.

A 2000 study in the Journal of Hypertension found that “In older adults, high intakes of ascorbic acid have modest effects on lowering high systolic blood pressure, which could contribute to the reported association between higher vitamin C intake and lower risk of cardiovascular disease and stroke.”

Likewise, a 2012 study concluded that vitamin C supplementation could lower systolic and diastolic blood pressure values. The study reviewed 29 trials and in total, a four to five-point reduction in SBP was seen while a one to two-point reduction in DBP was noted. The typical dose of vitamin C taken was 500 mg per day.

How to survive during recession
Mar 29, 20